PB2 Flourless Chocolate Brownies, made with PB2 (powdered peanut butter) instead of flour plus cocoa powder, raw honey and chocolate chips – gluten free, moist and delicious, you won’t believe they’re only around 130 calories each!

My husband and daughter love when I make a a new batch of brownies. Some of their favorites are these Cheesecake Brownies Zucchini Brownies, and these Flour-less Black Bean Brownies. When I played around with this recipe, we were pleasantly surprised with the outcome! The texture is somewhere in between a chocolate cake consistency and a fudgy brownie, they really hit the spot if you’re craving chocolate. 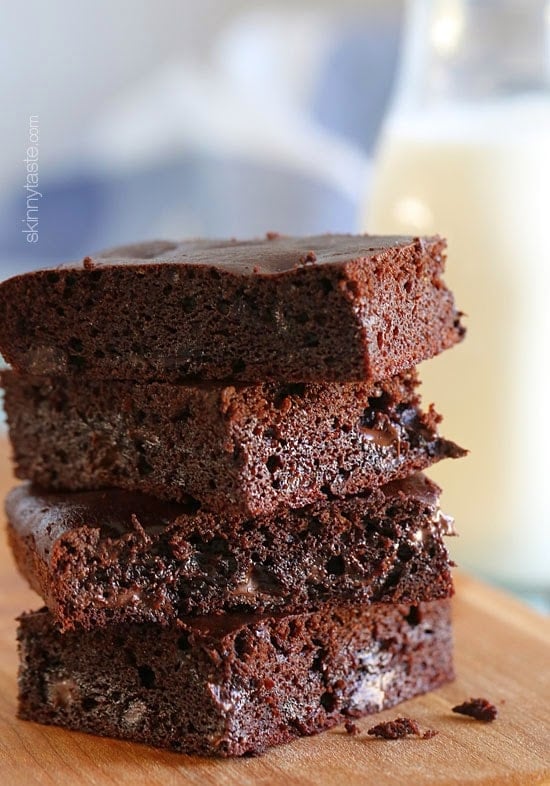 I’m not a baker. Baking is an edible science that requires accuracy and precision. It requires the perfect balance between flours, leaveners, fats, and liquids. When I bake, I feel more like a mad scientist because I break all the rules. So when something actually works and turns out awesome, I’ll be honest, I’m often surprised! These brownies are the perfect example – no flour, no oil or butter, but they are amazing (happy dance)! And the best part, you don’t need a fancy mixer. I mixed this all by hand in a large bowl with a whisk and a spatula.

If you’ve never heard of PB2 (affil link), it’s basically a powdered peanut butter with 85% less fat. You add a little water to make it a spreadable peanut butter. I personally prefer real peanut butter if I’m spreading it on toast, but for baking and adding to smoothies, PB2 is excellent. I used to buy it on Amazon, but now I see it in my local supermarket. 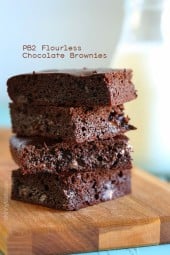