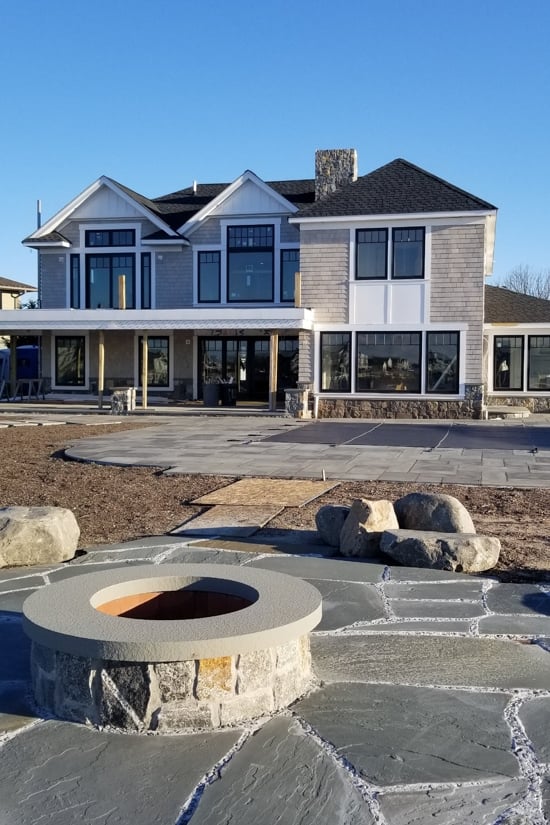 As most of you know from this post, we have been remodeling our new Long Island home for the past year, if not longer. We have gotten a lot done, and even as I share these photos there has already been a lot more progress, but we still have quite a bit of work to do before we move in. I know it will all be worth it in the end, I just can’t wait to start cooking in my new kitchen! Here are some photos of our progress.

First, I want to show a few photos of our kitchen before and during the remodel process. We went with an all white kitchen, as you can see from the photos we still need to install the hardware and pick out the backsplash. The floors also need to get stained and finished. We originally wanted dark wood floors but now the trend has gone to lighter floors so we are looking at lighter options. We also eliminated the dining room to expand the kitchen and create pantry. 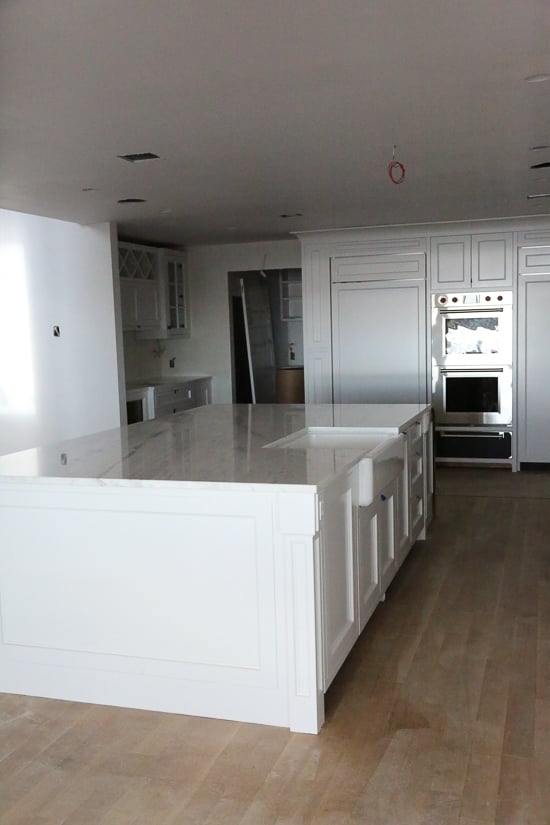 We went with a farm sink in the island, and all our appliances are Wolf. I was debating marble countertops, but we went with Quartzite Monte Blanc instead, which has less maintenance. I had opportunities to collaborate with many appliance brands, but we only wanted a Wolf range so I reached out them to see if they would be interested in collaborating and they said yes, we couldn’t be happier! 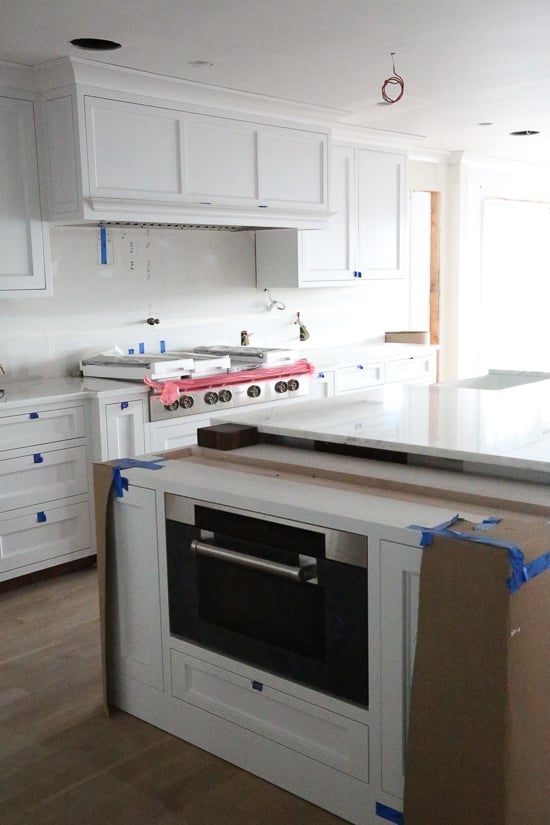 Although the kitchen is pretty large, living on the water we didn’t want to block the view so that left us with less cabinet space. We were able to work with our kitchen designer to come up with a plan that would make the kitchen functional, and easy to cook and entertain. Pictured above we have a Wolf Drop Down Door Microwave on the island as well as a dishwasher which you can’t see near the sink. 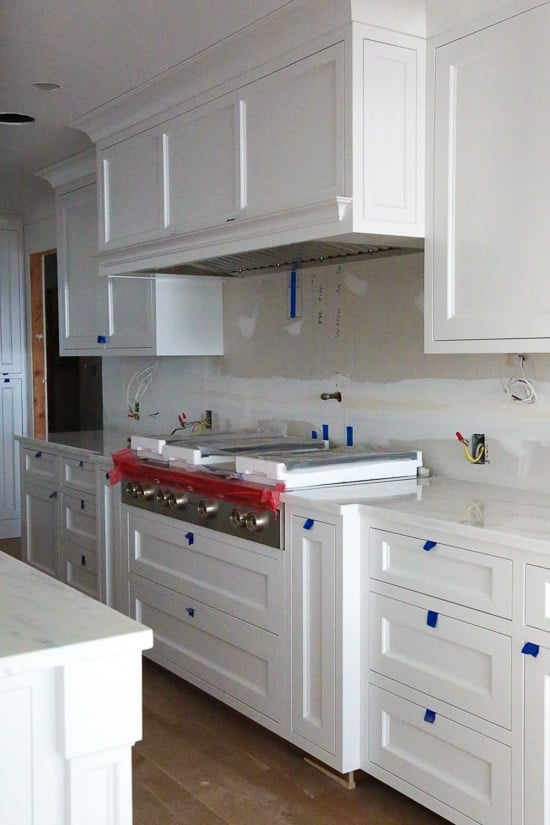 We love the 48″ Wolf Sealed Burner Rangetop because it has dual-stacked sealed burners which have two tiers of flame to deliver both high heat and lower heat settings. The control is precise and it’s essentially like having two burners in one. I cannot WAIT to cook on this! Just below that we have cabinets for our pots and pans. To the right and left of those drawers we have the spice racks that pull out. 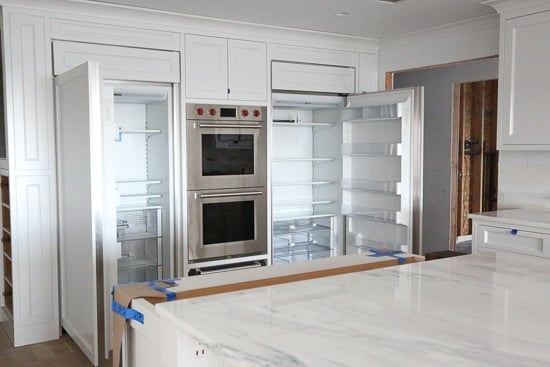 At the end of our island we are installing a butcher block which we are still waiting on. On the back wall, we have a Sub Zero Panel Ready Built-in Freezer on the left and Refrigerator on the right. Because I cook a lot, a separate freezer and refrigerator was a must for me, and I love that it’s not as deep as most refrigerators so things don’t get lost in the back. In between we have a Wolf double wall oven and just below that a Wolf Warming Drawer which will come in handy when I test recipes and want to keep them warm until dinner. 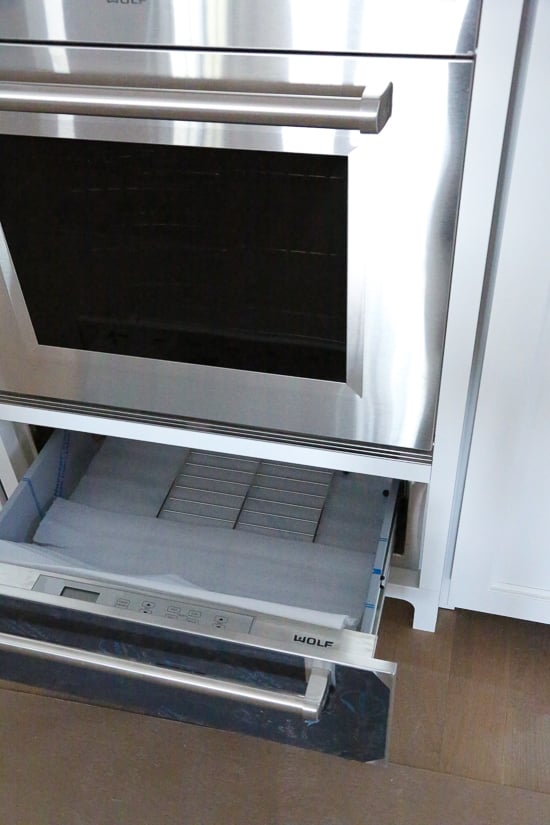 Just to the left of the refrigerator and double wall ovens we have a coffee/wine station with a Sub Zero Under Counter Wine Unit. This is where my coffee pot and wine will go, so I will be spending lots of time here : ) To the right of that sink we got a second panel ready Asko dishwasher, my husband does the dishes so he insisted on two. 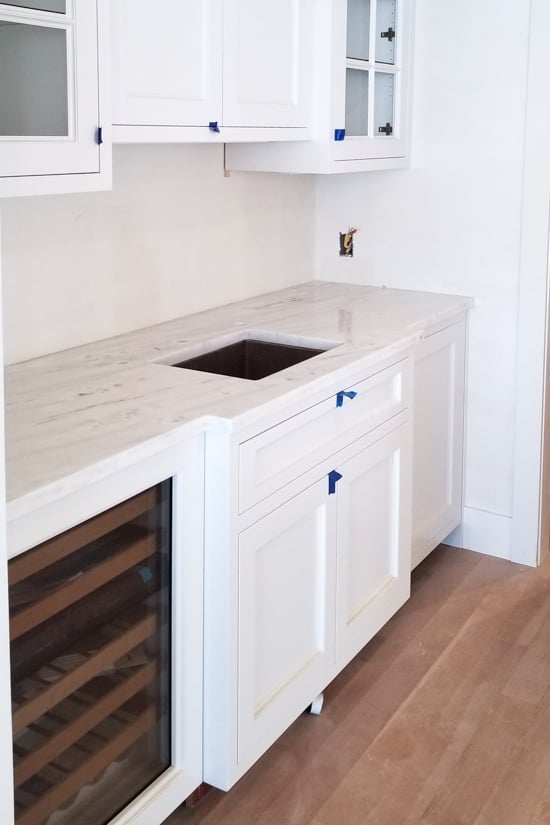 Pictured below is the other end of the kitchen where we will have a kitchen table. We love the beach feel of the windows and sliders, which are Anderson and chose white on the inside and black on the outside. We also made them larger so you can have a better view of the back. 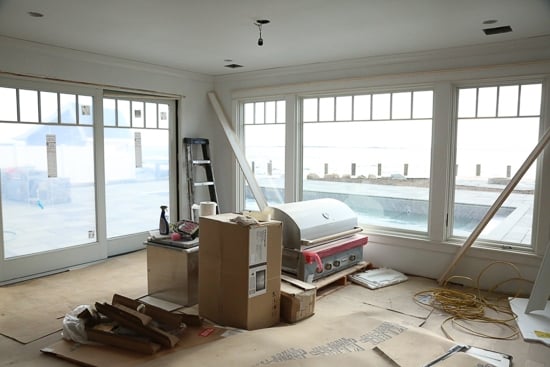 Here are some photos of the kitchen before. It was pretty, just a bit small and dated. As you can see we previously had baseboard heating which we removed and replaced with Sunboard radiant heating. 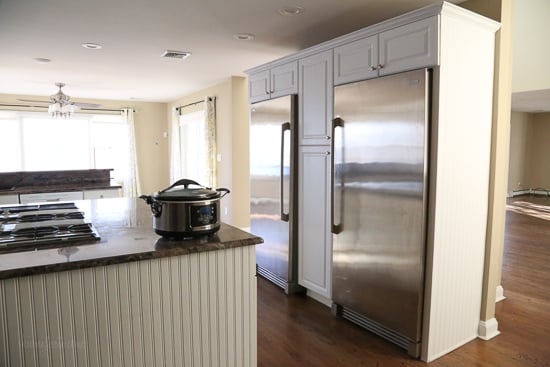 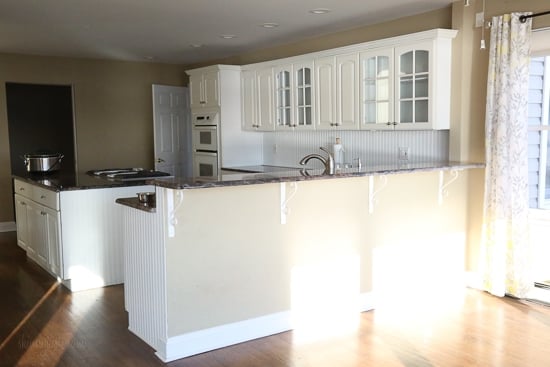 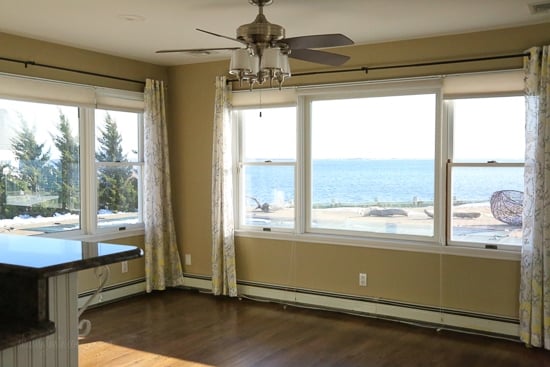 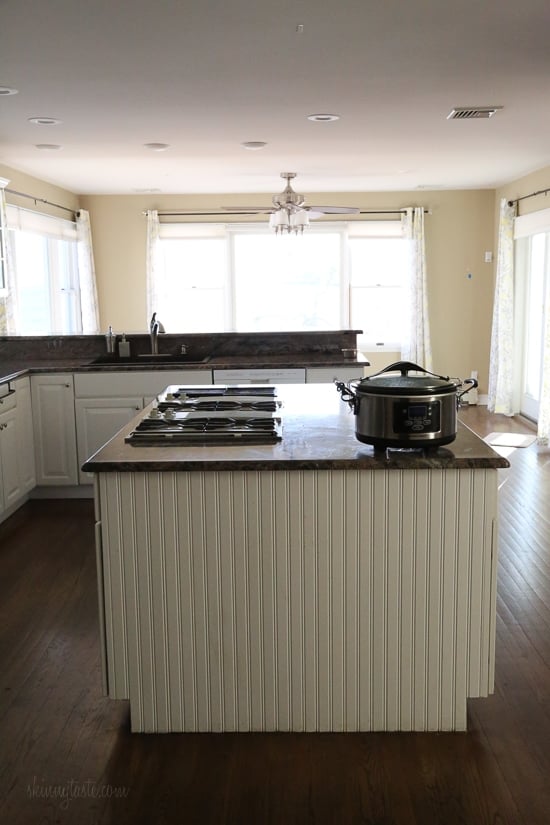 My favorite decision in the house was adding the ship lap along the wall of the second floor, which you can see from the first floor because of it’s open concept. We still don’t have a banister so ignore the wood planks… 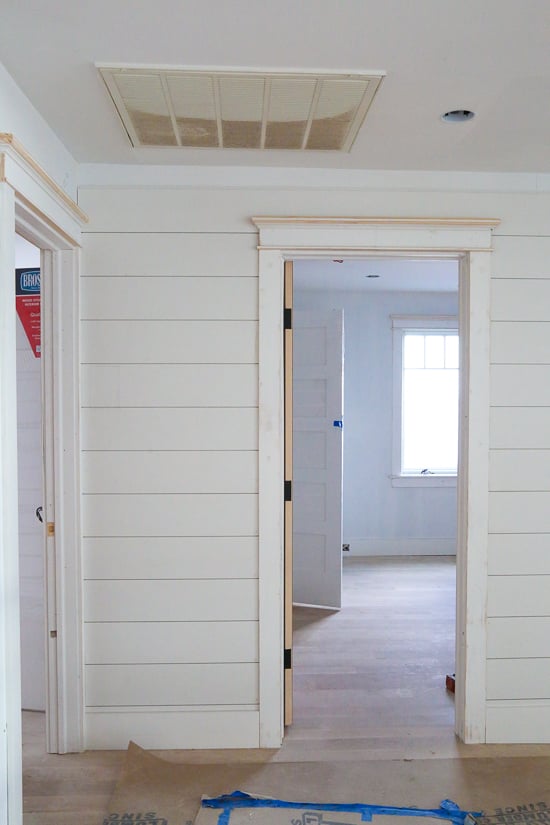 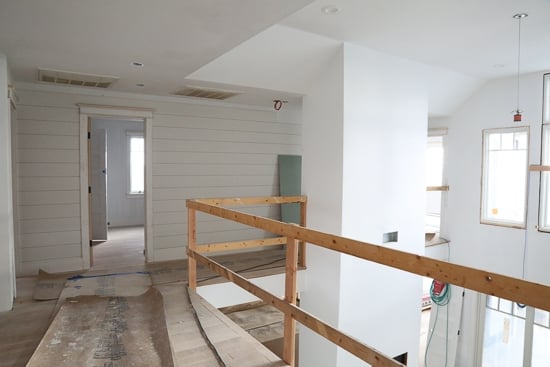 In the master bathroom, we are installing a roman shower rather than a bathtub because we know we would never use it. I love this hexagon marble tile in the shower area. 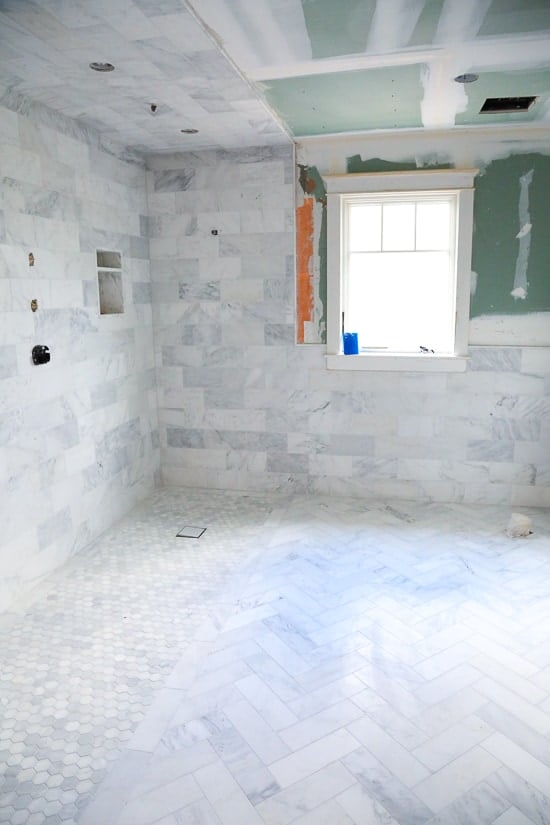 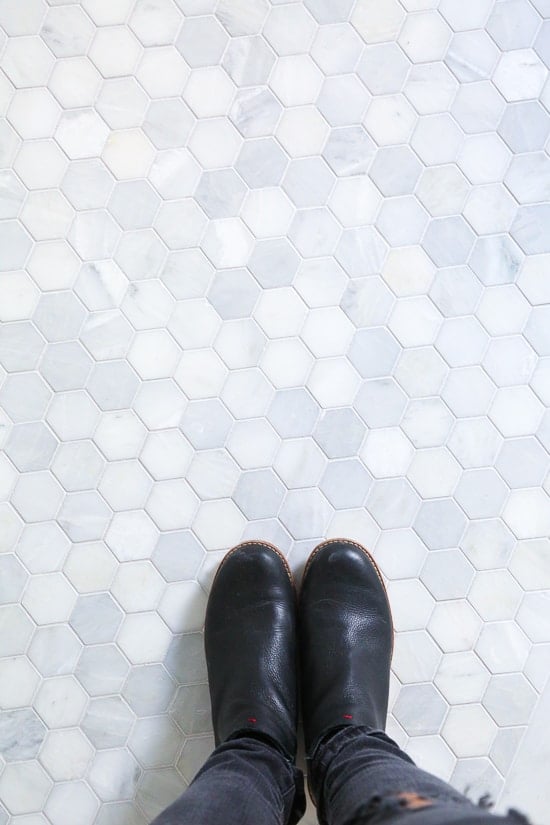 This was the master before, it was too large so we made it smaller and replaced it with a much needed walk-in closet. 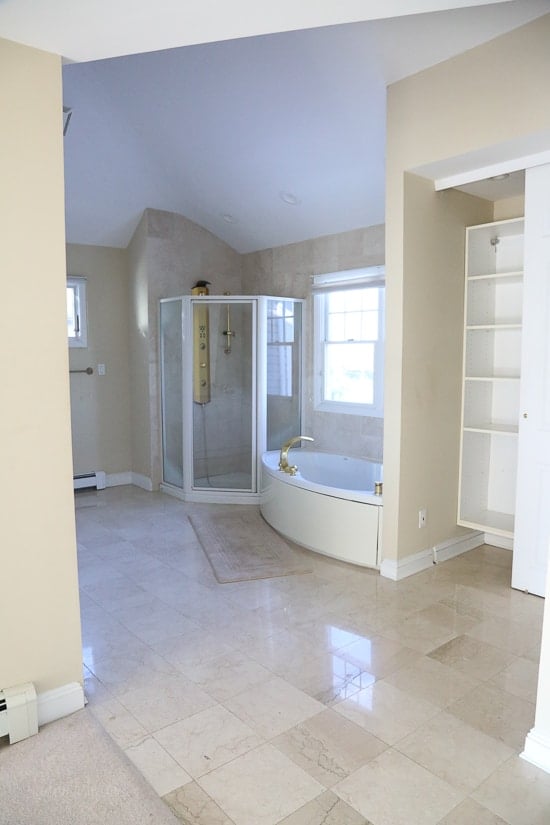 We also started building an outdoor kitchen for the summer, which we hope to use a lot! In addition to a range, Tommy insisted on getting a pizza oven so I am sure there will be lots of pizza recipes in my future. 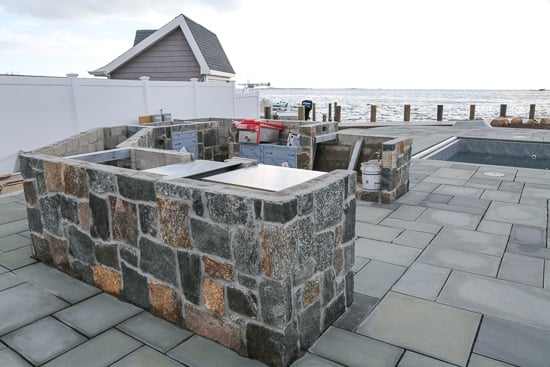 What we fell in love with most about our new house is the location. We can go crabbing right from our backyard and love the water views, especially the sunsets. I hope you enjoyed the kitchen progress and I will be sharing more photos as soon as the house is done, hoping sooner than later! 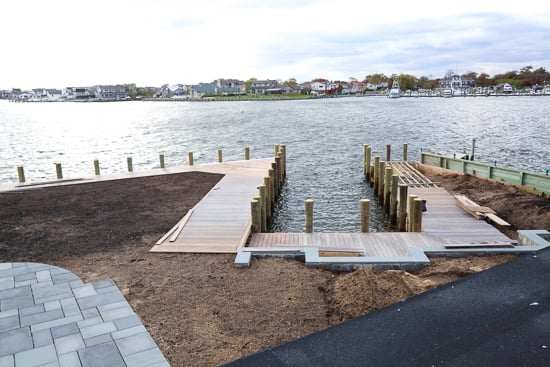 Disclosure: This post is created in partnership with Sub-Zero Wolf. All thoughts are my own.